This short section provides connections to longer walks. Follow a public right of way (FP147) from Threeways Farm on Blossoms Lane in Woodford along the private, no-through-road section of the road, passing Blossoms Farm on the left. Note that this section of road can be used by walkers, but is not a right of way for cyclists or horse riders. Dogs should be kept on a lead. As you walk down this lane you cross the border into Handforth, Cheshire East. Around 100 m or so beyond Blossoms Farm, turn left over a stile into a field belonging to Barr Green Farm and you are back over the border into Woodford, Stockport. The path crosses a short open section of field, where there are views across farm fields and towards Lyme Park and Kinder Scout in the distance. It then runs beside a stream and tall hedge on the right in this same field. The stream is crossed via a footbridge leading to a fenced footpath, which exits on to Church Lane alongside Glyn Evans Nursery, near a sharp bend in the road. Turning right at the exit onto Church Lane and walking 100 m leads to a footpath on the right, which is 5HGB, part of the Fred Perry Way. This path is very narrow in places and leads to Wilmslow Road. Alternatively, turning left at the exit of 4HGB onto Church Lane and walking 100 m leads to a footpath on the right (7HGB), which crosses fields belonging to Hill Top Farm and goes to Chester Road. From the Blossoms Lane end of 4HGB, a walk can be linked with footpaths leading west into Handforth, including Wilmslow FP127, FP128, FP129, or south west across the River Dean to Dean Row.

Map of footpaths in west Woodford and Handforth 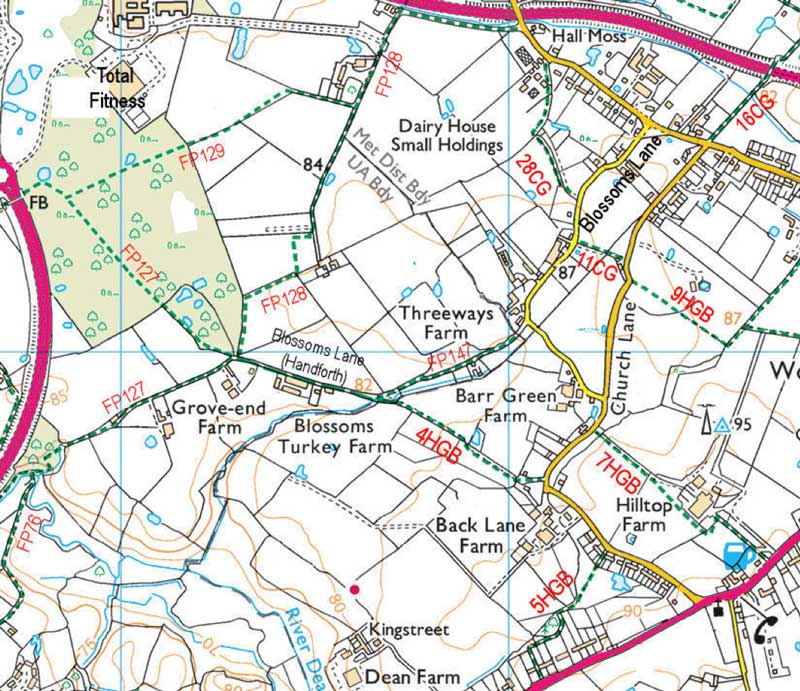